Stores never pay shoppers to take their goods away, but in extreme circumstances some businesses do, though generally in a very limited way. What’s happened in the oil market, however, was a massive and unprecedented negative swing, as the price on some futures contracts for West Texas crude fell to minus $37.63 a barrel. A collapse in petroleum demand from pandemic-driven lockdowns, a price war among the world’s largest producers that flooded the market, storage facilities nearing their capacities and the monthly rhythms of the futures market all played a role in the jaw-dropping development.

1. Why would a seller pay a buyer to take their oil?
For some producers, it may be cheaper in the long run than shutting down production or finding a place to store the supply bubbling out of the ground. Many worry that shutting their wells might damage them permanently, rendering them uneconomical in the future. There are also traders who buy oil futures contracts as a way of betting on price movements who have no intention of taking delivery of barrels. They can get caught by sharp price drops and face the choice of finding storage or selling at a loss. And the escalating glut of oil has made storage space scarce, and increasingly expensive. 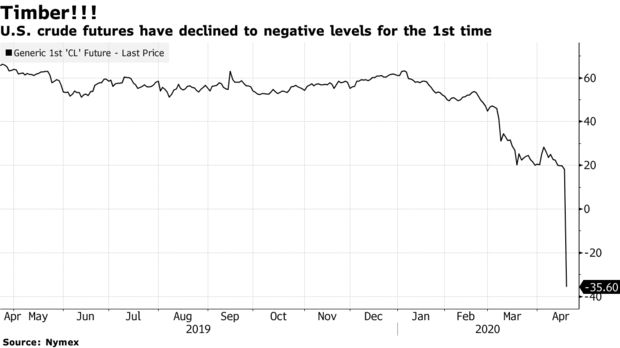 2. Where did the glut come from?
Either the pandemic or the price war by itself would have rocked the energy markets. Together they have turned them upside down. As the virus began to spread around the globe, it began eating away at oil demand in stages. But just as countries like Italy showed what kind of damage a national lockdown could do economically, Saudia Arabia and Russia, the world’s biggest oil producers, butted heads. A pact that had restrained production collapsed and both countries opened their taps to the fullest, releasing record volumes of crude into the market.

Yes, one worked out by OPEC, Russia, the U.S. and the Group of 20 countries. But its call for an overall production cut of roughly 10% proved to be too little, too late. Prices initially turned negative just in obscure corners of the U.S. market such as Wyoming, where storage options are few. Then major hubs began to register negative prices for small streams of selected crudes. And on April 20, prices fell sharply below zero on CME, the world’s largest energy market, as well as NYMEX.

4. What did futures contracts have to do with that?
The lowest prices came in trades in futures — contracts in which a buyer locks in a purchase at a stated price at a stated time. Futures are a tool for users of oil to hedge against price swings, but also a means of speculation. The contracts run for a set period, and traders who don’t want to unwind their position or take delivery generally roll over their contracts shortly before expiration. Contracts for May delivery were due to expire on April 21, putting maximum pressure the day before on traders whose contracts were coming due. For them, selling at a steeply negative price was better than filling bathtubs with oil, though the market rout was such that the physical domestic crude market did see trades on an outright basis for grades like WTI in Midland, Mars Blend, Light and Heavy Louisiana Sweet crudes at negative levels.

6. What happened to storage?
Since the glut began to build and prices began to fall, storage facilities have been moving toward capacity. Crude stockpiles at Cushing in Oklahoma– America’s key storage hub and delivery point of the West Texas Intermediate contract — have jumped 48% to almost 55 million barrels since the end of February. The hub had working storage capacity of 76 million as of Sept. 30, according to the Energy Information Administration. The industry has been accumulating supply aboard ships, while contemplating other creative options such as storing oil aboard rail tankers. The Trump Administration, which is concerned about the possible ripple effect from oil bankruptcies, is eyeing a proposal, which is still in its infancy, to pay oil drillers to keep their oil in the ground temporarily. The idea would be to keep it off the market until prices recovered, giving the Treasury a healthy profit while protecting producers from immediate losses. 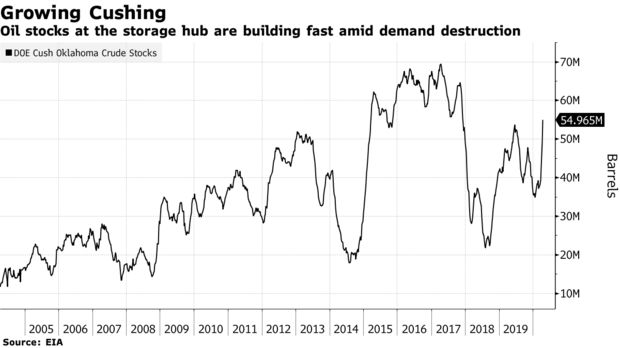 7. What does this mean for consumers?
Nationwide, the average gasoline price is down more than $1 a gallon in the past year to $1.81. It’s fallen every day since late February. It’ll take a couple more weeks for the declines in futures prices to be reflected at the pump. And with taxes making up part of the price, there’s only so low they can go. 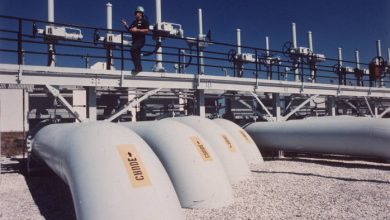